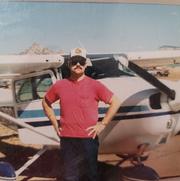 Craig Hewitt as we knew him

As remembered by Don Cluff

I first met Craig at a model contest at Williams AFB. I was a young teenager and had entered the contest. Craig was sitting behind the display tables standing guard as it were. He noticed me intently studying someone's Aurora A-37. I was amazed at the paint application, being new to airbrushing. He took the time to engage me in a quite long conversation about the art of model building. I left there full of enthusiasm.

Several years later our paths crossed again as we both found employment at Desert Hobbies. He introduced me to several members of local clubs. Names like Dick Schartz and Pat Fowler come to mind. At the time there were several local model building clubs and even a couple were IPMS. The level of local talent was amazing, but Craig was chief among them. A few years later I was able to open my own shop (Thunderbird Hobbies) that was in the area where Craig lived. He would invite me and others for a social evening with snacks and always a show-and-tell of what everyone was working on. He had a wonderful display of the most pristine, cleanly built kits I had seen. I recall vividly a Tamiya Lancaster that he had been working on. He painted it while I watched. He used a Paasche H on this particular project. The tight lines in the camo he was able to achieve would be amazing by today's standards.

If you had a question about an aircraft project, and asked Craig, be prepared for a call at 2 in the morning. He would break open his library (well before the Google age) and search until he found your answer....and immediately call you, regardless of time of day (or night). In my experience there was little Craig would not do to assist a fellow artist with their project.

The F4U was Craig's favorite modelling subject. At one time I had a dozen of his little (1/72) masterpieces on display at my shop, along with many others from his collection. He would visit often and brighten our day with his stories.

When he became ill and in the hospital, Stan Whitney (local modeller of some renown, and manager of Hobby Bench) and I would visit him. On one occasion, I had just returned from a hobby trade show. I came back with a copy of every new model-related catalog I could find. Stan and I took them by for Craig to enjoy. The smile on his face and joy in his eyes have never left my memory.

The last kit that Craig started, before his illness kept him from modelling, was a Monogram 1/48 F-14. I had it on display at Hobby Depot for several years.
When his health problems finally got the best of him, many of us, his modelling buddies, were gathered at the memorial. While we sat there telling stories about our friend, it dawned on us that the scene, his open casket, was not complete. Being near to my business, I hurried back to the shop and brought back one of his little Corsairs. We placed it on his chest before the casket was closed. Our tip of the hat to a wonderful person and dedicated modeller.

As remembered by Stan Whitney

(Stan was our own local Shep Paine. His work was often exhibited on the cover of Scale Modeler Magazine.)
"Craig, in my mind, was what scale modeling was all about — trying to create a beautiful little replica of what appeared on the box. His skills in that respect were peerless … never a seam showing, never a paint or glue smudge, decals perfectly placed … a perfect little airplane. I asked Craig if he’d give me a painting lesson one time. He invited me over to his house the following day and I watched him paint a little 72nd scale Corsair. I watched for about 3 hours, during which time Craig washed his hands and wiped down his work area about 5 times … absolutely NO lint or dust would be found on one of his models.

Craig was as conversational as he was talented: one of my favorite memories of him was sitting at his kitchen table, eating potato chips and drinking Pepsi. The guys were all in the next room talking about airplanes … we were just listening. He turned to me and said, “You know Stan … it just doesn’t get any better than this.” Craig left a big hole here when he went to Heaven. It was only fitting that we should name one of the the things we enjoyed the most out of our lives after him."

As Stan stated above, during the formation of the new IPMS club, we debated (very shortly) on what to call it. A quick, unanimous decision was reached to honor Craig by associating his name with it. The Corsair, being Craig's his favorite subject, became the club logo (created by the great Carl Park).
I'm sure that Craig is very proud of what the club has become, and the efforts by so many that haves made the club what it is today.

I hope these memories will help remind those who knew Craig as a talent/mentor/ambassador of the art we all love. Craig was not only a master modeler, but he was a master mentor and master ambassador of the hobby.
For those that did not have the pleasure of knowing him, perhaps this will give just a small taste of the total dedication, and love, Craig had for the art of scale modelling, and his fellow modellers.
Don Cluff

Around the age of 4 years old, Craig, his mother and little sister move to Tempe, Arizona from Bakersfield. Craig and his family lived in Tempe for the next 14 years, until he joined the U.S. Army in May of 1969.

After graduating high school, he received his draft number for the Vietnam war. Craig and his good friend Paul both had a strong sense of patriotism. Rather than be drafted, in 1969 he and Paul joined the U.S. Army under the buddy program. Craig went to basic and advanced training at Ft. Dix, New Jersey. He was trained as a light wheel vehicle mechanic (MOS 63B) and
crossed trained as a heavy vehicle mechanic (MOS 63C). Craig spent 2 years overseas, spending 18 months in Amberg, Germany and 6 months in Vietnam.

During his 6 months in Vietnam, his primary duty was heavy vehicle recover. He spent most of his time recovering tanks, trucks,artillery pieces and other heavy equipment from the rain-soaked environment of Vietnam. He
did this with a M-88A1 & A2 Hercules. Craig mentioned to the family that he was tasked with recovering heavy equipment from areas that had been sprayed with Agent Orange. Craig also told us about being shot at from the tree line while recovering equipment.

Craig left the army in January of 1972, with the rank of SP5/E5 and with 3 MOS(s) 63B, 63C and 23A. He received the National Defense Service medal, a Vietnam Campaign medal, and Vietnam Service medal with an honorable discharge. He returned home from his time in the U.S. Army, to the comfort of model building.

Craig started building model planes and cars at the early age of seven. He became very good at building plastic models by the time he entered into high school. Before he would start building the model, he would do extensive research on the accuracy of each model. Including the proper paint, markings and unit numbers. His dedication to his art and his attention to detail made for some of the best model replicas in the world.

Craig passed away from brain cancer in August 1989. He and his family suspected his exposure to Agent Orange was the cause of the cancer.